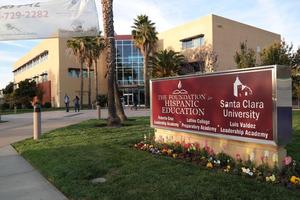 Incoming Freshmen and Parents, are you looking if LCPA is the right fit for your student? Please take the time to read a student testimonial from one of our LCPA Class of 2020 Seniors!

Alberto Mendez is a senior at Latino College Preparatory Academy (LCPA) who aspires to attend UC Santa Barbara to pursue a major in Mathematics. With Alberto’s vast amount of knowledge and expertise in Mathematics, he certainly stands as a strong candidate in his major at his future dream school. In addition, every summer throughout high school, he attended a summer enrichment program called Summer Math and Science Honors (SMASH), where he spent five weeks out of his summer at Stanford University. In the program, Alberto immersed in rigorous STEM classes that enhanced his abilities in Mathematics even further. Alberto has been a soccer and cross-country athlete throughout all his four years of high school. As the Associated Student Body (ASB) Vice President (VP) and former Lieutenant Governor for his Junior Class Committee, Alberto has been able to channel his educational experiences into positive leadership contributions in supporting his community.

Coming from East Side San Jose, Alberto feels that all schools in The Foundation for Hispanic Education have a secure connection with students that come from the same background. Due to the high population of Latinos in East San Jose, all schools in The Foundation of Hispanic Education gracefully open the doors to underrepresented communities to ensure comfort and acceptance into higher educational institutions. Throughout high school, Alberto has felt more at ease, knowing that he can rely on his teachers without worrying that he will be overlooked. He says that the attention provided by teachers and staff has helped in ensuring his academic success in high school as well as his personal growth. Having the opportunity to join a variety of sports offered at LCPA also provided extra comfort in his academic success as they served as stress-relievers for him and his peers.

Once Alberto graduates from Latino College Preparatory, he would love to come back and contribute by being a tutor and mentor for students that will take the SAT/ACT as well as extra standardized testing for college. The best piece of advice that Alberto has for incoming Freshman is to take every year seriously.